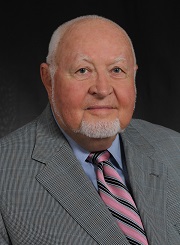 Donald Lee Blount was a remarkable naval architect whose research and engineering innovation in the field of high-speed craft hydrodynamics significantly contributed to the US Navy's high performance small vessel fleet.

Born in Roanoke, VA in 1935 he attended William Fleming High School. In 1954 he enrolled at Virginia Tech to study mechanical engineering with interest in designing steam locomotives. Norfolk & Western Railway’s transition to diesel engines urged him to make a life career change, leave school, and sign up for an internship at the David Taylor Model Basin. Three years later, he earned a naval architecture job, and soon enrolled at George Washington University to complete his formal degree.

Donald had a notable professional career with the establishment of Donald L. Blount and Associates in 1988 as its major highlight. He authored more than 50 technical publications throughout his career and in addition to his professional achievements, he became well-renowned as an advocate for maritime research and development and a devoted mentor.

Donald joined SNAME in 1959 and until his passing he was engaged with the Society. He served SNAME at national and international level and during his 60+ years of membership he was recognized several times for his contributions to the industry by his professional Society.

In 1982 he was elevated to the grade of Fellow, a distinction earned by SNAME members who make outstanding contributions to naval architecture, marine or ocean engineering, or allied disciplines through significant achievements in design, research, production, operation, education, or associated management.

A few years later, in 1987, Donald received the ABS - Captain Joseph H. Linnard Prize for the paper “Research Plan for the Investigation of Dynamic Instability of Small High-Speed Craft” authored by Steven H. Cohen and himself.

In 1991 he received the Vice Admiral E. L. Cochrane Award for the paper "Dynamic Stability of Planing Boats" authored by Louis T. Codega and himself.

The high point was 2015, when he received The David W. Taylor Medal for “Notable Achievement in Naval Architecture and/or Marine Engineering.”

The Donald L. Blount Memorial Scholarship is part of the SNAME Graduate Scholarships Program, and open to applicants worldwide, who are members, in good standing, of SNAME. Applicants need to be SNAME members for at least four (4) months before the application deadline, looking to pursue studies focusing on high-speed craft hydrodynamics and culminating in a graduate degree. If applicants already have a Master of Engineering degree and would like to continue studies focusing on high-speed craft hydrodynamics, they will remain eligible for consideration for postgraduate (PhD) study.

The Donald L. Blount Memorial Scholarship can be used by the student for tuition, textbooks, supplies, required equipment and academic fees, other academically related expenses required for enrollment at an educational institution, or for room and board or other necessary living expenses.

One scholarship for one year of study may be awarded annually.