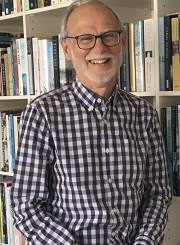 David Andrews was made Professor of Engineering Design at University College London in September 2000, following his early retirement from a wide-ranging career in the UK Ministry of Defence, extensively involved in the design of a large number of naval vessels. He retired from the One Star post of Director of Frigates and Mine Countermeasures; prior to this he was the MoD Professor of Naval Architecture at UCL (the equivalent of the Professor of Naval Construction at MIT). Before that he was Assistant Director Future Design in the Future Projects (Naval) Directorate after being Warship Project Manager for the procurement of the UK’s Replacement Amphibious Shipping Programme.

David Andrews is an acknowledged international authority on ship design methodology, with particular reference to naval ship design, including submarines and unconventional vessels, particularly Trimaran ship design. From 1997 he edited all the International Marine Design Conference State of the Art Reports on Marine Vehicle Design Methodology to date and since 2015 has been Chair of the IMDC International Committee. In 2000 he was elected a Fellow of the Royal Academy of Engineering for the developments he pioneered in ship design methods. His comprehensive and seminal paper on early stage design of complex vessels was published by Royal Institution of Naval Architects in October 2018 and it was uniquely recommended for "Council Commendation" and that it also be issued to all young members of the Institution. In April 2020 the RINA Council approved his award of the William Froude Medal in recognition of his contribution to the field of ship design and having made a conspicuous contribution to naval architecture.

About The David W. Taylor Medal

The David W. Taylor Medal is for "Notable Achievement in Naval Architecture and/or Marine Engineering".

It was established by the Executive Committee in 1935 in honor of its namesake and first recipient, Rear Admiral David Watson Taylor.

Rear Admiral David W. Taylor, a Past President of SNAME, is known as “the father of American ship research”. He is internationally recognized for his “…outstanding achievements in naval architecture and marine engineering, for revolutionary results of persistent research in hull design, for improvements in many types of warships and airships, and for distinguished service as Chief Constructor of the United States Navy during World War I.” *

The award title is "The David W. Taylor Medal." The medal will be made of gold-plated bronze approximately 2 1/2 inches (6.25 cm) in diameter, one side to show likeness of Rear Admiral Taylor, the other side to show an inscription of award. Eligibility for the medal need not be limited to membership in SNAME. The proposal for award may be made by a member of SNAME in good standing.

The selection of the nominee for the medal shall be made by the Awards Committee of SNAME. The nomination by the Committee and final award by the Council will require a two-thirds vote of the Committee. Notification of the award will be made prior to the SNAME Maritime Convention (formerly the Annual Meeting) and the medal will be presented with suitable ceremonies at the SNAME Maritime Convention or at such time as the President of SNAME may arrange. The medal may be awarded annually.