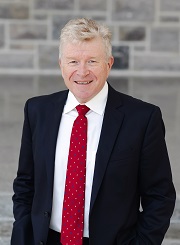 Dr. Eric Paterson is the Executive Director of the Virginia Tech National Security Institute and the Rolls-Royce Commonwealth Professor of Marine Propulsion. Previously, he served Virginia Tech as the Head of the Kevin T. Crofton Department of Aerospace and Ocean Engineering and as the Interim Executive Director of the Ted and Karyn Hume Center for National Security and Technology. Professor Paterson has taught numerous undergraduate and graduate courses, including resistance and propulsion of ships, submarine design, turbulent shear flow, and marine hydrodynamics. He has supervised 50 Master’s and PhD students. His research expertise is in computational ship hydrodynamics, turbulence modeling, and the physics of stratified fluids and internal gravity waves. He is a Fellow of the Society of Naval Architects and Marine Engineers, and an Associate Fellow of the American Institute of Aeronautics and Astronautics. He has previously served SNAME as Editor-in-Chief of the Journal of Ship Research, Chair of the Hydrodynamics Committee, and member of the H-08 Propulsion Hydrodynamics Committee. Paterson earned his BS, MS, and PhD degrees in Mechanical Engineering from The University of Iowa.

About The William H. Webb Medal

The William H. Webb Medal is for "Outstanding Contributions to Education in Naval Architecture, Marine or Ocean Engineering".

It was established in 1987 in honor of William H. Webb.

Born into a shipbuilding family, William H. Webb was a highly successful shipbuilder, shipowner and educator whose contributions to the marine profession and commitment to the education of naval architects, marine engineers, and shipbuilders took shape in “Webb’s Academy and Home for Shipbuilders”, now known as Webb Institute.

The award title is "The William H. Webb Medal”. The medal will be made of gold-plated bronze, approximately 2 1/2 inches (6.25 cm) in diameter, the obverse side showing a profile of William H. Webb and the reverse side carrying an inscription of the award. Eligibility for the medal need not be limited to membership in SNAME. The proposal for award may be made by a member of SNAME in good standing.

The selection of the nominee for the medal shall be made by the Awards Committee of SNAME. The nomination by the Committee and final award by the Council will require a two-thirds vote of the Committee. Notification of the award will be made prior to the SNAME Maritime Convention (formerly the Annual Meeting) and the medal will be presented with suitable ceremonies at the SNAME Maritime Convention or at such time as the President of SNAME may arrange. The medal may be awarded biennially in odd years.