Outstanding Accomplishment in the Marine Field 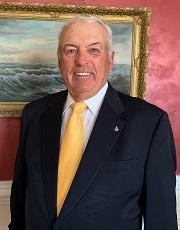 Toner joined Electric Boat in 1965 as a Test Engineer and over the next 25 years held several managerial positions, including Manager of Reactor Services, Manager of Trident Ship's Management, Assistant General Superintendent of the Pipe Shop, and Director of Facilities Management. In 1990, Toner was appointed Electric Boat’s Director of Operations and directed all production, planning and support activities from the start of a submarine’s construction to its delivery. He was promoted to Vice President of Operations two years later. In 1994, he was appointed Vice President of Delivery and was responsible for all production, delivery and support activities at Electric Boat's five facilities in Connecticut, New Jersey, New York and Rhode Island. In 1995, he became Vice President of Innovation and was responsible for all engineering and design activity. In 1998, he became Senior Vice President of Electric Boat.

In March of 2003, Toner was promoted to EVP- Marine Systems, responsible for the GD Marine Group, made up of Electric Boat (EB), Bath Iron Works (BIW) & National Steel & Shipbuilding Company (NASSCO). Toner retired from GD on 12/31/2008 after 43 and 1/2 years of service.

The Vice Admiral Emory S. ‘Jerry’ Land Medal is for "Outstanding Accomplishment in the Marine Field."

It was established by the Executive Committee in 1952 in honor of Vice Admiral Emory S. ‘Jerry’ Land.

VADM Emory S. Land is recognized as instrumental in the buildup of the U.S. Merchant Marine prior to and during World War II. His role in the design, establishment and maintenance of S-class submarines, Liberty and Victory ships, and merchant ships during those troubled years was a key factor in the country’s success during the war. His mark on the establishment and development of the United States Merchant Marine Academy was also indelible, and his service to his professional society culminated with his serving as SNAME President.

The award title is "The Vice Admiral Emory S. ‘Jerry’ Land Medal." The medal will be made of gold-plated bronze, hexagonal in shape, measuring 2 1/2 inches (6.25 cm) from the top to bottom across the points of the hexagon, the obverse side showing a likeness of Admiral Land and the reverse side carrying an inscription of the award. Eligibility for the medal need not be limited to membership in SNAME. The proposal for award may be made by a member of SNAME in good standing.

The selection of the nominee for the medal shall be made by the Awards Committee of SNAME. The nomination by the Committee and the final award by the Council will require a two-thirds vote of the Committee. Notification of the award will be made prior to the SNAME Maritime Convention (formerly the Annual Meeting) and the medal will be presented with suitable ceremonies at the SNAME Maritime Convention or at such time as the SNAME President may arrange. The medal may be awarded annually.