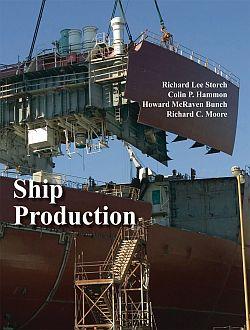 In 1982 the leaders of the national Shipbuilding Research Program (NSRP) recognized the need for greater focus on shipbuilding education; the result was the establishment of an education panel (SP-9) within the Society of Naval Architects and Marine Engineers Ship Production Committee-the implementation arm of the NSRP. The first project authorized by the panel was a textbook on advanced concepts of ship production. This edition was revised in 1995 to update the contents to be consistent with technological advances made since the book’s publication in 1988.

The focus of this book is state-of-the-art technology and its application to the principals and practices of shipbuilding employing group technology. The authors present a system aimed at optimizing productivity in shipbuilding under current technological conditions. Also included are chapters devoted to basic manufacturing and construction processes and the design for production and CAD/CAM applications. The book is suitable for the upperclass undergraduate and graduate courses, as well as serving as a valuable resource for practicing shipbuilding professionals. Chapter one contains history of shipbuilding and statistics relating to production and market share. Chapter two has been expanded to more directly incorporate material relating to shipbuilding economic theory. Chapter four contains new material, which relates to the fabrication process. New material has been added to Chapter five to more accurately reflect the conditions of current ship production facilities. Chapter six (Ship Design and Engineering), Chapter seven (Planning, Scheduling and Production Control), and Chapter eight (Accuracy Control) have all been updated to reflect the impact of computers on these important areas. Chapter nine (Ship Conversion, Overhaul, and Repair) has been totally rewritten to reflect the experiences of a major consulting firm that has extensively supported shipyards in improvement of their conversion and repair operations.