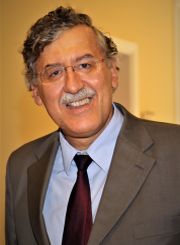 Kostas Spyrou is a Professor at the National Technical University of Athens (NTUA), expert on the mathematical modeling, investigation and assessment of ship dynamic stability, and, more generally of dynamic processes affecting ship safety. He pioneered the application of nonlinear dynamical systems methods towards understanding extreme ship motion phenomena. His influence to the state-of-art and, in particular, to the clarification of the broaching-to instability of ships in following/quartering seas is widely acknowledged internationally. He led also the development of first-principles approaches for ship fire safety assessment and for the evaluation of cargo shift tendency. He promoted the connection of system dynamics and risk analysis.

He is the current Chairman of the Standing Committee managing the international conferences and workshops on the stability and safety of ships and ocean vehicles. He was the Weinblum Memorial Lecturer for the academic year 2016-2017, a title conferred to international leaders in ship hydrodynamics. He has led NTUA‘s School of Naval Architecture & Marine Engineering and also the Hellenic Institute of Marine Technology. For several years, he was a Visiting Professor at the University of Strathclyde in Glasgow. He has been involved with various national or international committees and organizations and contributed to the works of the International Maritime Organization (IMO) towards the second generation intact stability criteria. He is a Fellow of the Society of Naval Architects and Marine Engineers and a Fellow of the Royal Institution of Naval Architects.

It was established by the Executive Committee in 1959 in honor of Dr. Kenneth S. M. Davidson.

Mechanical Engineering Professor Dr. Kenneth S. M. Davidson, is recognized as a pioneering researcher on craft dynamics. His belief that "bigger is not necessarily better when it comes to research" directed his work. The creation of the Davidson Towing Tank at the Stevens Institute of Technology is his legacy for future generations of naval architects and marine engineers.

The award title is "The Dr. Kenneth S. M. Davidson Medal". The medal will be made of gold-plated bronze, approximately 2 1/2 inches (6.25 cm) in diameter, the obverse side showing a profile of Dr. Davidson and the reverse side carrying an inscription of the award. Eligibility for the medal need not be limited to membership in SNAME. The proposal for this award may be made by a member of SNAME in good standing.

The selection of the nominee for the medal shall be made by the Awards Committee of SNAME. The nomination by the Committee and the final award by the Council will require a two-thirds vote of the Committee. Notification of the award will be made prior to the SNAME Maritime Convention (formerly the Annual Meeting) and the medal will be presented with suitable ceremonies at the SNAME Maritime Convention or at such time as the SNAME President may arrange. The medal may be awarded biennially in even years but not more often.